How Light Rays Can Provide an Effective Chronic Pain Treatment

While it may be more evident in some individuals than others, the steady march of time is inevitably reflected by changes in our physical appearance and performance. Since ancient times, people have sought ways in which to minimise or even to reverse the visible signs of advancing years. It is said, for example, that Cleopatra maintained a stable of 700 donkeys to provide milk for her daily rejuvenating baths while, around two centuries later, a Greek physician named Galen formulated one of the earliest anti-ageing treatments with a cold cream consisting of olive oil, water, and beeswax.

Interestingly, both options had merit in that they acted as exfoliants and skin softeners. Over the centuries, alternative ideas such as slices of raw meat to reduce wrinkles, and aged wine as an exfoliant gained popularity. The first commercial product appeared at the turn of the nineteenth century. Consisting of adhesive patches designed to hold the skin taut and smooth out wrinkles, it was aptly-named “Frownies”. Modern technology has since led to the development of numerous anti-ageing treatments ranging from cosmetic surgery to light therapy. For a number of sound reasons, the latter has steadily gained favour. 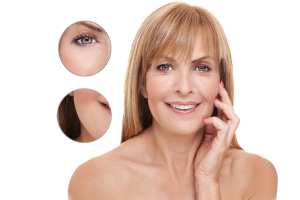 Botox™ treatments and collagen fillers are minimally invasive techniques but can still be uncomfortable and always expensive while requiring regular repetitions. The highly invasive surgical procedures are even more costly, require a lengthy recovery period, and are still not a permanent solution. Although, to date, there are still no anti-ageing treatments that can claim to offer permanent results, the light therapy equipment available from Photizo offers a non-invasive, gentle, relaxing, and affordable therapy that can be self-administered in the privacy and comfort of one’s own home.

The Photizo product is a compact, handheld device that employs an array of light-emitting diodes (LEDs) to generate light in both the visible red and infrared regions of the spectrum. In contrast to high-energy laser sources which carry the risk of damaging subcutaneous tissues, anti-ageing treatments conducted using the radiation from LEDs is much milder. They deliver just enough energy to stimulate healing effects such as increased production of healthy collagen which then serves to plump and tighten sagging skin and to smooth out those telltale wrinkles.

While that may seem convincing, some might be tempted to ask if it really works. The healing benefits of sunlight have long been known and in 1903, a Danish physician was awarded a Nobel Prize for his ground-breaking work on phototherapy. Since then, this technology has proved highly effective not only for those seeking anti-ageing treatments, but also for the relief of pain and the treatment of various skin conditions.

Improving the appearance of broken capillaries with light therapy

Using light therapy to help alleviate the discomfort of lacerations

A laceration is defined as a tearing or rupturing of soft tissue, such as the…

Take years off your skin with light therapy

It’s one of life’s inevitables – your skin will age! Common skin changes that appear…

This website uses cookies to improve your experience while you navigate through the website. Out of these cookies, the cookies that are categorized as necessary are stored on your browser as they are essential for the working of basic functionalities of the website. We also use third-party cookies that help us analyze and understand how you use this website. These cookies will be stored in your browser only with your consent. You also have the option to opt-out of these cookies. But opting out of some of these cookies may have an effect on your browsing experience.
Necessary Always Enabled
Necessary cookies are absolutely essential for the website to function properly. This category only includes cookies that ensures basic functionalities and security features of the website. These cookies do not store any personal information.
Non-necessary
Any cookies that may not be particularly necessary for the website to function and is used specifically to collect user personal data via analytics, ads, other embedded contents are termed as non-necessary cookies. It is mandatory to procure user consent prior to running these cookies on your website.
SAVE & ACCEPT